Because Mothers Don’t Want It To Be Over. Even the Hard Stuff.

Mar 5, 2015 | Motherhood, No such thing as just a mom, Rabid fear of parenting, surprised by motherhood, Uncategorized | 9 comments

Before we got married, I told my husband that I didn’t plan to have children. 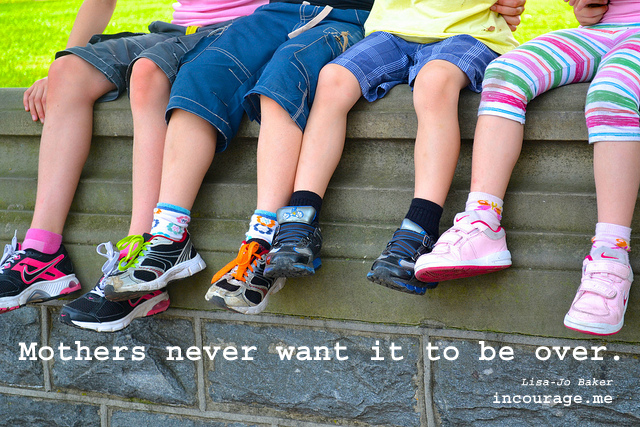 I may not have put it quite as politely as that. But I was carrying around a gut wound of leftover childhood junk, and it had convinced me that I’d rather run far away than have kids. It was a backwards coming-of-age story from there to a delivery room in Pretoria, South Africa.

Our DNA is born from our stories as much as from our mothers. Maybe they’re the same thing.

Both of mine started deep in the mealie fields of Zululand—now modern-day KwaZulu-Natal—in South Africa. I grew up on the stories of a young couple—a missionary/doctor/father and a brand-new teacher/bride/mother—learning how to speak Zulu and make stywe pap, the stiff porridge-like maize meal that’s the consistency of play dough and a staple of South African dishes.

I can still close my eyes and smell mangoes. I can still hear the cicadas and the hadida birds and feel the red dirt between my toes no matter how far I’ve traveled away from my childhood. And it took a journey of three hundred miles and three decades backwards to write the story that ended in a delivery room in Pretoria and started in the heart of Zululand. It was August of 1974, the season of South African spring. My father, fresh from medical school, and his friend Cliff were the only two doctors serving the Manguzi Mission Hospital, named for the abundance of mango trees that marked the area. South Africa is a place of dry heat except for this tropical heartland of the Zulu nation. Remote, rural, and echoing with the guttural clicks and lore of Shaka Zulu, Manguzi was a place where apartheid was only slowly encroaching at the time.

My young parents beat it back with nothing but their faith and the way they chose to live. In the heart of the community—working, praying, serving, teaching, doing life alongside. And over nine of those months, my mother’s belly grew large and stiff as that stywe pap, and she swayed to the rhythm of stamping feet and voices joining in chorus across fields and in the chapel where my father preached on Sundays.

While the mangoes ripened, Dad was flown by bush pilot into the remote parts of the countryside to set up clinics under the avocado trees. He tells how he tried to control the rough airsickness of the bumpy plane rides by setting his sights on one scrubby thorn tree after another en route to the villages. More often than not, he lost.

Mothers would line up with babies strapped to their backs by huge felt blankets. Choruses of flies and voices filled the air. Vaccinations, medications, and large doses of empathy were distributed. Sometimes long lines of open mouths would form for the dental clinic, shots given one after another down the row until the nursing sister made her way back to the beginning to start pulling the numbed teeth.

But even in the face of modern medicine, sangomas swore that the spirits spoke to them and demanded sacrifice when a woman was barren or a child was ill. And the people paid. The people always paid. They paid the malaria and the TB; they paid the wealthy and those with white skin. They paid the government and the leprosy, and they still managed to retain pieces of themselves.

This is the story my parents delivered me into. Because you can stoop through the doorway of a smoke-stained hut and eat over a three-legged cast-iron pot using only your fingers as utensils as you share about the day—and for a moment, you can be family. Our moment lasted three years. And I was born into the heart of it.

I don’t know if my mother was afraid to have me so far from home. I do know that she claimed the promise from Isaiah 65:23, that the chosen of the Lord “shall not labor in vain or bear children for calamity” (ESV).

And on the day my mother bore down and delivered me into the world, my dad tells over and over how first she stopped pushing.

As he stood beside her, his young wife simply stopped in mid-delivery of their first child. Just out of medical school, with only Cliff on hand to assist, he couldn’t understand what she was thinking—this woman who would give me her name.

And my mother, he says, smiled and waited before she bore down again and delivered me into his hands—baby catcher, father, missionary man. They say I screamed loudly enough for my stoic ouma—mother to my own mother—to comment about her first grandchild with the last name of her fiery son-in-law: “Yes, you can tell she’s a Rous.”

Only later, when I was in the yellow crib they had painted and safe under the mosquito netting, did he ask my mother why. “Why did you stop pushing?”

And ever since I was a little girl, my heart has raced at her answer. “Because I didn’t want it to be over.” 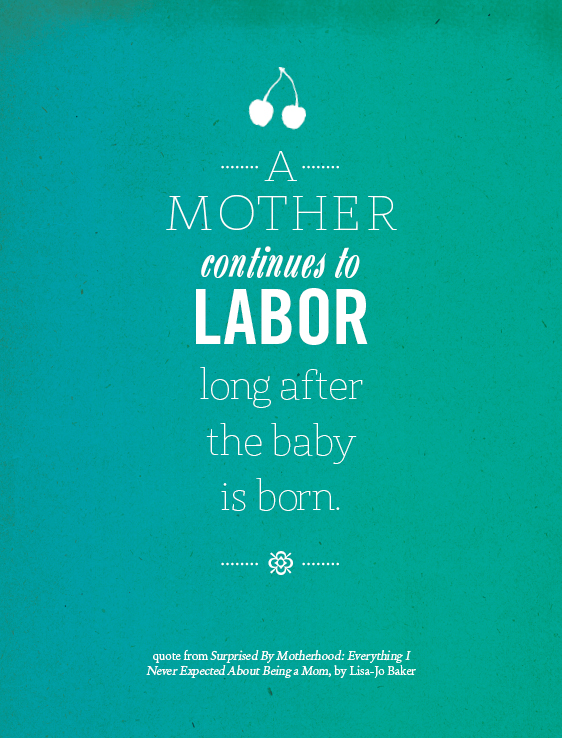 Since so much of my story with my mother was cut short, it has somehow soothed me to know that from the beginning she didn’t want it to be over.

Like a hand stroking damp hair from my forehead, she reaches out of the past to soothe my thirty-eight years with the reminder that mothers never want it to be over.

Even the hard stuff.

But they don’t want it to end—this delivering, shaping, cheering, loving, bringing life into the world.

This is an excerpt from my book, Surprised by Motherhood: Everything I Never Expected About Being a Mom.

To read the first 3 chapters for free, click here.

Thank you for all the brave, beautiful, hard stuff you mother through. It doesn’t go unnoticed. Promise.