« Will You Pray with Us This Week?
When You Feel Like Nothing You Do Makes a Difference, Read This »

It’s nearly 2am here in South Africa and I’ve been up since 4am (hellloooo jet lag!) My hair is still stuck to my neck with sweat and dust but I’m here at my computer because you guys, you beautiful amazing women on the other side of this screen, I can’t wait one minute longer to share with you the one thing I discovered today that we absolutely can’t afford to miss out on.

In the last 24 hours we’ve slept very little and instead visited and talked and listened and learned and laughed and soaked in the wonderful faces of South Africa and while there are probably 100 different blog posts I could write, this is the one that came pouring out of my fingers tonight because I don’t want you to miss it. I don’t want to miss it. I want to remember what I learned (or maybe what I’d simply forgotten) today.

When we bump into people who are in need, I don’t know about you, but often the knee-jerk emotion I can feel is guilt.

But man, have we ever got that wrong.

If there’s only one thing you remember from this half-way-around-the-world blog post, let it be this:

Let me say that again, because it’s stuck on repeat in my own head.

You reading this while you’re waiting in the car pool line, or on the train or stuck in traffic or outside your son’s classroom or your daughter’s ballet class or in between loads of laundry or locked in the bathroom trying to find a spare second of quiet —

I’m not sure how that fact got missed along the way.

But it did, I think.

Maybe if you’ve been nervous to see what I’d write from South Africa it’s because the last thing you need is one more layer of guilt to add to the shame and worry and mother guilt we’ve already layered thick onto ourselves.

But today, out in the dirt and the dust and the JOY of the community we visited I rediscovered this beautiful truth —> Our God is a giver of GOOD GIFTS. He is the Father who doesn’t give His sons and daughters a rock or a snake when they are hungry; He gives them hearty, healthy bread.

So when he lets our lives so beautifully, unexpectedly and yes, sometimes even uncomfortably, bump into the lives of other people in His Kingdom who have a need that we can meet — He’s offering us a divine gift.

He’s in essence extending through that orphan kid or the shy child or the local leader or the mom with more mouths than she knows how to feed an invitation into the work HE IS ALREADY DOING and will continue doing whether we choose to be a part of it or not.

He’s not interested in our guilt; He’s offering us an invitation.

He’s not interested in our guilt; He’s generously offering us a good measure, pressed down, shaken together and running over, with the joy of working alongside Him.

You see, He already has enough.

He already is enough.

He will accomplish His Kingdom here on earth as it is in heaven. Whether we choose to participate or not.

He’s simply, generously inviting us to be part of that wild, miraculous journey with Him.

Because today, I heard story after story of the hopeless, helpless, awkward and uncomfortable situations that people on the Take Action team have faced. And they were honest in their struggle to sometimes just want to avoid it altogether. Because who has the capacity to take in one more orphan baby who is HIV positive and will grow up with nerve damage and a limp?

Who can keep supporting 100 kids who show up every day for breakfast when the grant funding the food is suddenly stopped?

Who has the energy to keep visiting the homes of those kids who show up with no school uniforms, no shoes, no hope?

Who plans for bigger buildings and more specialized early education for 200 kids when there’s barely money to support 100?

They are the people who see a gift in every single new need that comes their way.

They are gift experts. They see gifts where so many of us would just see guilt, exhaustion or impossibilty.

Man, I want those eyes.

I want a life full of those gifts.

Because whether we see something as a guilt trip or a gift is entirely in the eye of the beholder.

Here, let me show you — there was so much joy radiating off the people who have said YES and received the gift of being part of the coming of the Kingdom of Heaven here on Earth that if you lean in close enough, I think you can feel it through these photos as if you’d been there in person as well:

My Jackson was awkward and uncomfortable today until he forgot about himself because he was so busy helping the littles eat their apples and peel their bananas. 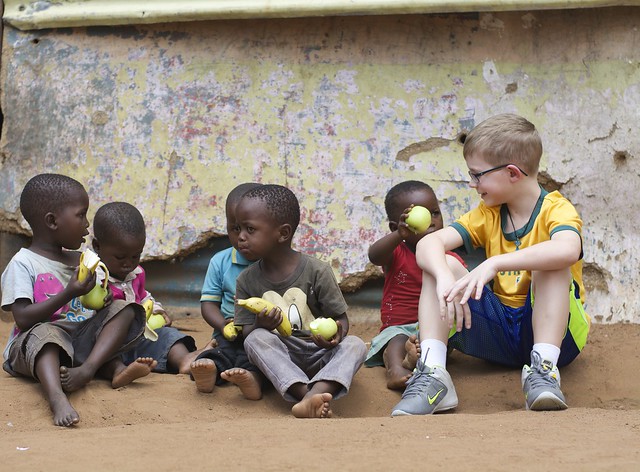 Elizabeth’s grant ran out to feed the hundreds of kids who come to her mother’s house every morning for breakfast and every afternoon for lunch and after school care, but they kept supporting them with her mother’s small pension. Today they have a small government grant and still too many mouths to feed but have never turned a child away. Or stopped smiling, apparently. Or empowering other women – 21 caretakers are part of Elizabeth’s team and only 9 of them are able to be paid at the moment (we’re hoping to help change that in the future!) 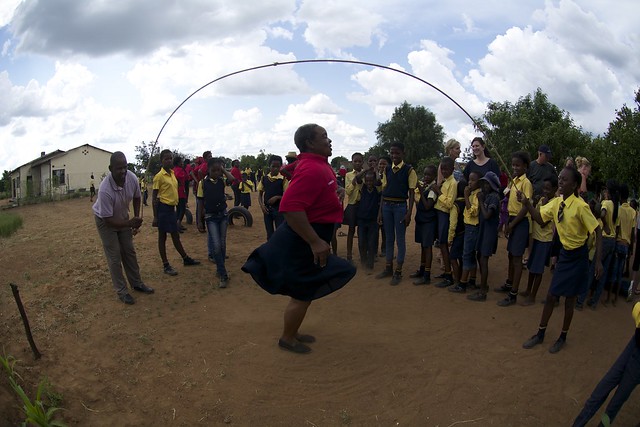 Annelien, Wanda, Jonna, Peter, Darrin and Morne are all part of the Take Action team and spend their days preparing family care plans and figuring out how much porridge is available to go around and which families they will deliver groceries to. They’ve had funding fall through and mouths outnumber their provisions, but to be near them is to feel like anything is possible with God because He’s said so and shown so and they have the stories and names to prove it. 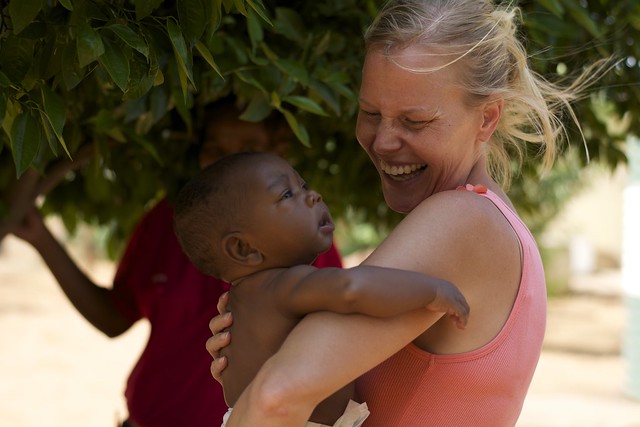 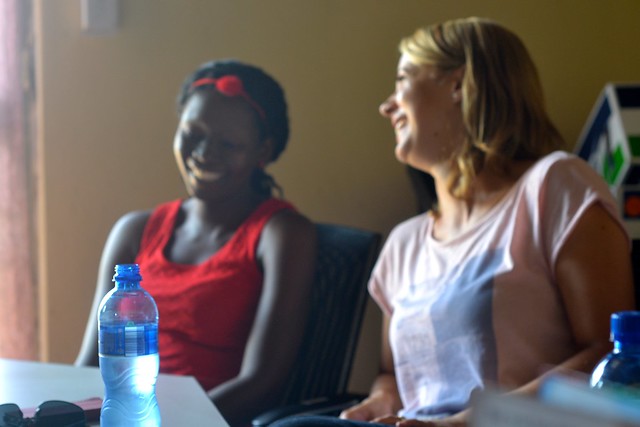 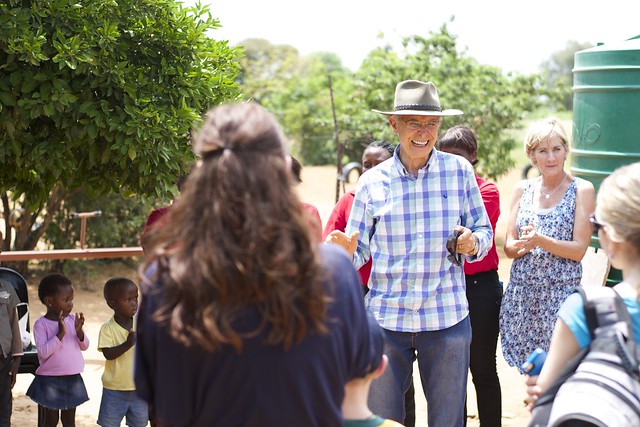 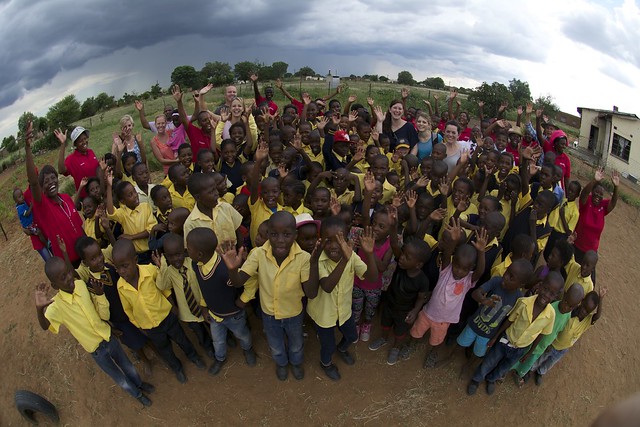 This trip – it’s an invitation I’d hate for you to miss out on because of guilt.

This trip – it’s an opportunity to be part of the Kingdom of heaven as it comes here on earth.

So many more stories of how and what that might look like will follow. But for now, I’ve got to squeeze in a shower and hopefully at least five hours of sleep before my alarm goes off and we head out to meet more of these gorgeous, generous, life-changing gifts tomorrow!

(And be sure you’re reading Crystal’s posts about this trip as well – her insights as a total newbie to all things South Africa are fascinating.)

With thanks to Anthony Churchyard for the beautiful photos.