« Wholeness Parenting: an Alternative to Helicopter and Free Range Parenting
While Everyone Else Was Looking At “The Dress” I Can’t Stop Staring At This Photo »

Hello, my name is Lisa-Jo and I am a lame Compassion International sponsor.

I originally wrote this blog post four years ago and apparently I still haven’t learned my lesson. Because today when I logged on to write a birthday letter to Daniel who I met in Guatemala on a Compassion International trip four years ago I clicked on the “letters to date” tab. And I was mortified to see I’d only sent ONE letter last year. You guys, I am SO LAME. I had to go and re-read my own post and it made me want to share it with you all again.

Four years ago I thought about starting a support group – “Lame Sponsors Anonymous.” ‘Cause on my trip with Ann, Lindsey and Amanda to Guatemala I just knew that there were others out there like me who could be founding members. 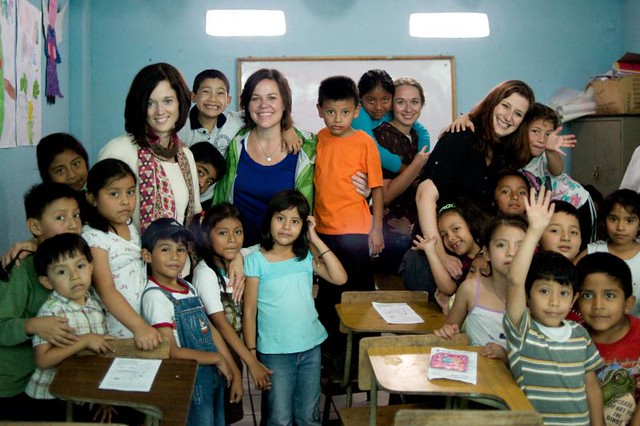 Here’s the deal- we sponsor two kids through Compassion International and I have never really put much stock in letter writing. I mean, we write – sure – but no more than maybe four times a year; when he writes us, we write back. I just don’t really see how much a five-year-old can get out of a letter from a strange white woman formerly of South Africa now living all the way over in the U, S of A.

I mean, we pay the $38/month, right? How much could a letter really matter? Four years ago, with tears and mascara running down my face, I found out.

My life is all boys. I have two brothers, one step-brother, one adopted brother, three nephews, two sons and a husband. Yea, that’s a lot of testosterone right there. So not surprisingly, the Compassion kids we sponsor turned out to be boys as well. There’s nine-year old Thomas from Ghana and nine-year-old Daniel from Guatemala. And yes, I have a nine-year-old son, Jackson and a seven-year old son, Micah

Four years ago in Guatemala, three more boys moved into my heart.

Each of them have been supported by the same Compassion International Child Development Center since they were six years old. They are twenty four now. And they don’t know it, but they put the smack down on everything I have thought up to this point about corresponding with my sponsored children. (Well them and Shaun Groves whose family, I discovered, writes a letter a month to each of their four Compassion kids. Oy vey!)

So me and my lame, low-letter producing self asked Mynar, “but what if our sponsored kids can’t read yet. Do the letters mean anything to them?”

His eyes widened in amazement and then he leaned forward, hands clasped in front of him and told me, “We save all our letters.” 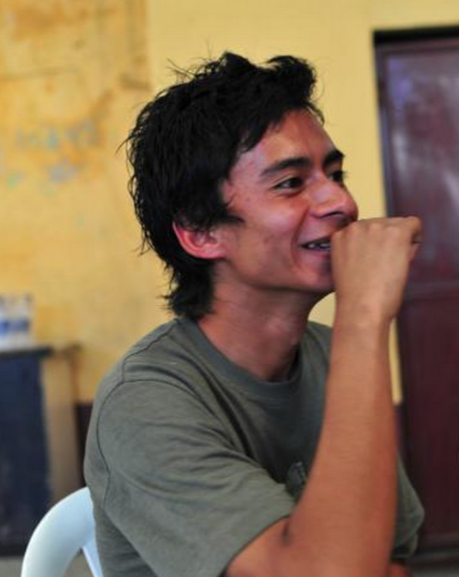 “And even though when we were little, Compassion workers read them to us, when we grew up we could read them ourselves. So we go back and start at the beginning. We read every letter again to get to know our Sponsors better.” 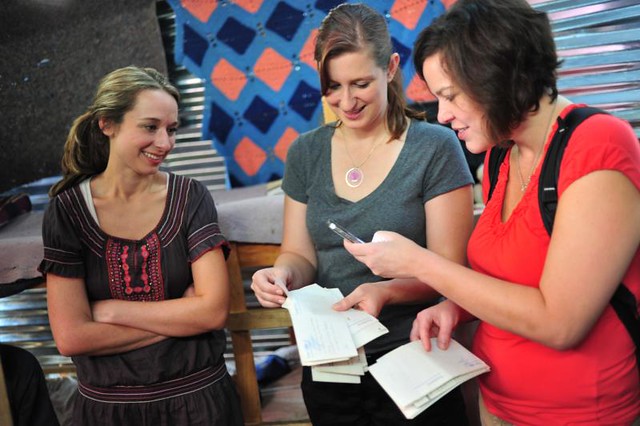 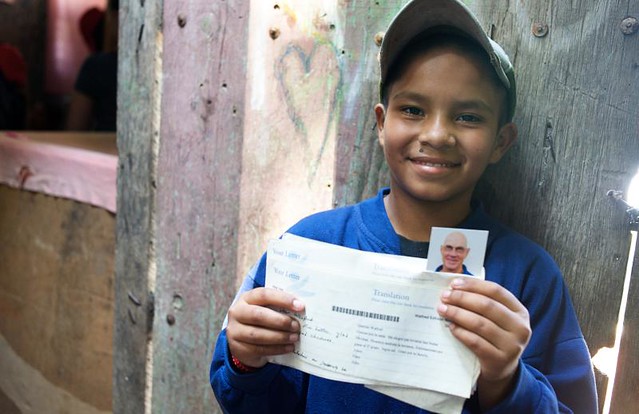 Daniel chimed in, “Getting a letter from your sponsor, it’s just so cool!”

I’m guessing that Angela from Australia would be delighted to see the big grin that I got to reap from her fourteen years of correspondence. 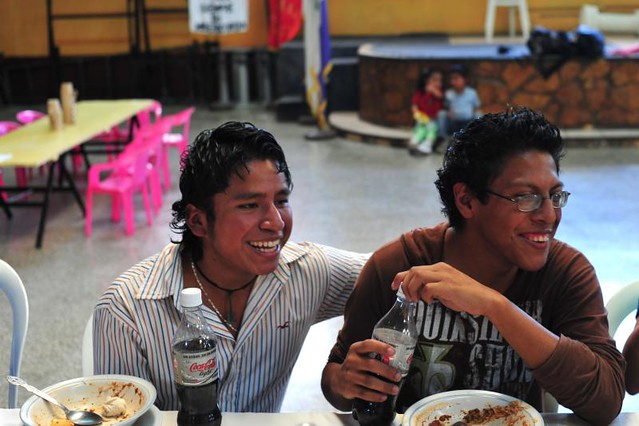 I listened. I listened as Mynar spelled out the three reasons why the letters that have come from Margaret in the U.K. for the past fourteen years are saved and re-read time and time again:

Josue’s sponsor is also from the U.K. His name is “Mr. David” and he’s a missionary. Mr. David started sponsoring Josue when he was still single. Over the last fourteen years Mr. David met his wife, got married, and had a first baby boy. And he sent Josue all the pictures and correspondence to include him in the journey. They are connected by a bridge of letters. And even though Josue knew from the other kids that sponsors who got married often dropped the sponsorship commitment as they moved into their new lives, Mr. David stuck by him.

Glue. Words and lives and stories and exchanges. Glue that holds boys together when all around them their friends are splintering into a thousand shards of broken bits and pieces splintered by gangs and prison and hopelessness.

“Do you know Sarah?”

The young boy who has materialized at my elbow asks again, “Do you know Sarah? She also lives in America like you.”

The translator is quick to explain. This is Gaspar and his sponsor is Sarah. He wants to know if I know her. He’s with his friends Luis and Manuel. They are the mini-versions of Daniel, Mynar and Josue. 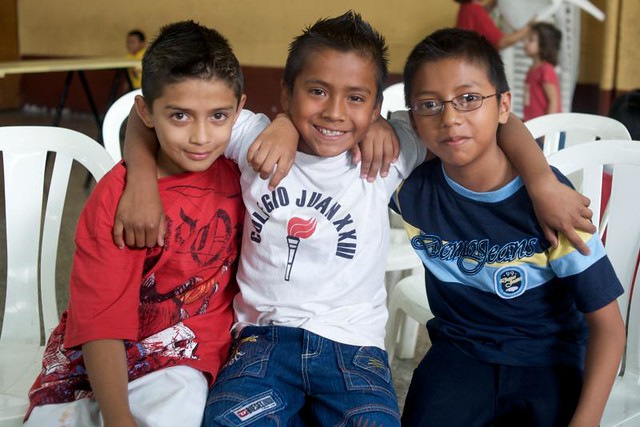 Five years. Five years Sarah has been sponsoring Gaspar (who is in the white shirt) and in that time he has received only two letters. Luis (on the right) is only five months into his first sponsorship and he is eager to write to Mike and Caroline but he can’t until they write first. And he’s still waiting. I hear the story repeated in different voices all throughout the afternoon. I mean, how can your name be Darling and somehow you’ve never received a letter from your sponsor?

“if she has a husband,” says Gaspar. “And where she lives. How old she is and what work she does.”

It only takes very simple words to build a sturdy bridge.

These boys, they climb into my heart with both feet. I feel them in there stomping around and rearranging things. And it wells up in my eyes and my hot cheeks and strangely I find it hard to swallow. My fingers are itching for a pen.

And by gum if I don’t hope yours are too!

Our letters are more important than our money. Our words more valuable than our automatic withdrawals.

And we can change the course of history by investing in the person instead of just the payment plan.

I want Gaspar and Luis and Manuel to grow up to be as sure that they are loved and covered in prayer as Mynar and Josue and Daniel. Heck, I want that for my own boys.

And so I am determined to tear up my Lame Sponsors Anonymous card once and for all and pick up pen and paper. I will write. I will keep writing letters to my Compassion kids and prayers to the God who lays Himself down as the living bridge between us.

Because I have walked across and discovered what He has known all along:

Let us not give up meeting together, as some are in the habit of doing, but let us encourage one another—and all the more as you see the Day approaching. Hebrews 10:25.

Won’t you join me? Come on, let’s run across that bridge!

If you sponsor a Compassion International child won’t you write him or her a letter today.

Click here to email a letter and photos to your sponosred child. Compassion will print it out and mail it for you! (I just did it this morning – it’s so simple).

And get this, many children like Gaspar have sponsors but no communication; no relationship. And Compassion tells me they’re always looking for more letter writers to match up with existing sponsored kids.

Click here to become a child correspondent- a word sponsor – to write to a child and tell a Gaspar or Luis that he matters more than any dollar value. He matters because God says so. Simple as that.

And I promise I’ll be here with you, setting calendar reminders to write monthly letters so I can tear up my lame sponsor card once and for all.

Let me know if you wrote a letter today- just leave a comment or reply to your subscriber email and we can continue to encourage each other, yes?

All photos by the amazing Keely Marie Scott.