« I’d Love To Meet You In Person This Year – Will You Be In Any Of These Places?
What I Want to Tell My Daughter About Being a Mother »

I didn’t think you would.

I’m going to cry as I remember this. But I’m going to write it down because some photographs are better captured in words. They’re the kind I need to properly see how you looked when you crossed that finish line.

I didn’t know what to tell you last week when you promised me you were going to grow up to win an Olympic gold. I didn’t know how to encourage you while also telling you the truth. Because you’re nearly 11 and you and I spend more time talking about the real things of life and love and the dreams of the man you’re going to grow into than we could when you were only six.

We talk in the car and I work had to be honest. To tell you the truth. Because the truth is a safe place and it’s a strong place and it’s the place I want you to build your home, my son.

You were born under the Southern Cross. The purple jacarandas celebrated with waving arms and a royal carpet the day we drove you up the drive way and home. Church family and far away family poured into my father’s house for weeks and months after your birth. We were living in the small cottage out back and it became a sanctuary. Even if it was sleep deprived one.

We were besotted with you from the beginning.

You took your first steps under those jacarandas.

But then we moved back to that States, but always kept coming home to South Africa in the long dark Michigan winters to be met with South African summer, tea and scones, jasmine and jacaranda trees.

Four years ago I raced you on my old high school track underneath the brights lights. You’d heard all the stories about your mom, the track star in her own mind, who ran the 100m, 200m, 800m and the relay. You’d heard the stories and you wanted to get your own feet onto that track to see if you had it in you.

Everyone was there – two carloads of family as you and I took our spots at the 200m starting line under the bright lights. Just that ring of family cheering a private, crazy moment between a mom and her eight year old son as we hurled ourselves around the track.

I’d thought I’d go easy on you. I didn’t want you to be embarrassed in front of your Ouma and Oupa and cousins. But instead, you set your face like flint and you flew. You flew my son. And it occurred to me too late that I’d miscalculated and I needed to pick up the pace to catch you. To catch up to the boy of my blood and my bones and my DNA with a love for speed.

But my knees groaned and the stitch in my side told me I was out of shape and then out of time and you blazed across the finish line and Karabo and Micah and Zoe and all the family were whooping and hollering as I laughed myself into a shocked second place.

Do you remember that night? I’ll never forget it. How the sky was black and a few stray stars made it through the halo of bright track lights and we ran on the grass that was too long because it wasn’t track season yet. But we ran anyway.

You ran at your first track meet on a beautiful asphalt track and I stood across from the start line, behind the fence, with my heart in my throat. I was crying before the starting gun fired. 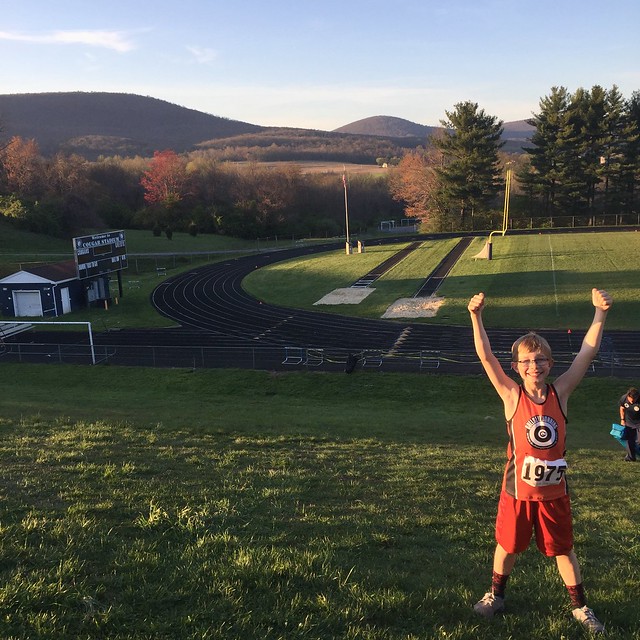 Because there we were – decades later my 18 year old self would never have believed it. But there we both were – the me I’d been in high school and the me I am now – both watching my son take his mark at the start of the 800m.

My race. The race I’ve run ragged and won and lost and won, my dad never missing a single meet. He’d come straight from work in tie and suit and I’d cough and choke at the finish line through his cloud of cologne as he wrapped me into his arms and his proud congratulations and I tried desperately to catch my breath from the ache of the win.

That race will hurt you. I’ve told you that many times, Jackson.

That race will hurt and you’ll have to race yourself more than you race anyone else. Because you’ll have to push yourself to keep going when you want to quit. That’s what gold medals are made of.

So you lined up at the starting blocks and they fired the gun and my heart leapt forward with the little guy in the glasses as his legs pumped into action.

“Go, baby, go!” moms scream and they don’t have to use their baby’s first names because the kids, they recognize their moms voices and they run. They run as hard and as fast and as long as they can and sometimes that still leaves them in dead last place.

But that doesn’t matter to moms – because moms keep shouting, they keep cheering and whooping and hollering long after everyone else has crossed the finish line because their baby is still running.

And the rest of the crowd, they catch the vision and they’re swept away with a mother and a single runner and all end up on their feet cheering them both home.

So when that shot shoots you out of the starting blocks I’m already crying because there’s my South African baby running his guts out on an American track under a sapphire sky.

I can tell the pace is fast and unless you can hang with the first two runners who have broken away from the pack you won’t make it. You’ll miss the window. I’m trying to yell but my throat is so clogged with tears I can’t seem to get the words to make any sound.

But your brother is next to me. And he’s hanging over the fence and he’s yelling – “Go Jackson, go. Run! Don’t give up!” And then you’re coming up the 100m side of the track heading into the second lap and you’re still there, still hanging onto the other top two and I know this is when your lungs will start to burn and your legs will tell you they can’t keep up.

This is when you win your gold medal, son. At this moment. Not at the finish line. You earn it out there on the far side of the track without any encouragement in your ears when you keep running even though your lungs and your legs are telling you that they can’t.

But you run on.

You run down to the far corner and now all that’s left is 200m. And the one remaining boy ahead of you, he makes a break for it. He goes for it. And his arms are pumping wild and I have a moment where I wonder if you’ll decide to stick with him. Because I know it’s gonna hurt.

You stick like South African made super glue and your face turns fierce. Your eyes are huge behind your glasses and I can see your elbows pumping, pumping wildly as you race that boy down the last 100m.

And now I’m hanging over the fence. I’m in a long line of parents and I’m yelling so loud I can’t even remember what I said. I just know I’m crying and I’m yelling and the group of parents around me stop watching the race and start watching my face and they realize who we’re yelling for and they all take up the yell with us.

And you’re doing it. Your face hurts and I can see your eyes desperately squinting at that finish line and your legs are flying. You’re flying down the track son. And now you’re passing the last runner and you don’t slow down for a second. You don’t give an inch. You’re earning every second of that finish as you push for home and then there it is.

You pass the finish line first.

And the moms around me are all asking, “Is that your son?” while Micah is yelling, “That’s my brother!” And I’m nodding because it’s hard to talk but some words have to be said out loud. They just have to. “Yes,” I say. “That’s my son. That’s Jackson.”

My boy who ran with me and now outruns me and it’s my honor. It’s the proudest honor of my life to see him run much further and much faster than I ever did.