Shake, Rattle and Roll its a Preschool Graduation

How over-played is this whole graduation industry in the States I thought to myself. No way in heck am I trekking my tired self and my tireder still toddler to attend something that ludicrous.

Especially since my kid isn’t even graduating (whatever that means for a 4 year old – or is it 5 – I am never sure how the age bracket works here).

But, breaking the news to Jackson’s teacher didn’t go quite as smoothly as I expected. Turns out that his class is singing at the sacred event. Three whole songs. They’d been practicing for weeks. I was cornered. I ran out of excuses. I was trapped by her big brown eyes that were issuing an appeal on behalf of my son. So, I caved, called Pete and informed him that we needed to be at the Preschool Graduation ceremony by 6.45pm.

I heard him roll his eyes over the phone.

Jackson got dressed in his fancy clothes and “church shoes” – he was ecstatic to have an excuse to wear them. Frankly, so was I – look how freakin’ cute they are! It’s so mini-gangsta circa 1920. Thank you sweet gods of the consignment sale! 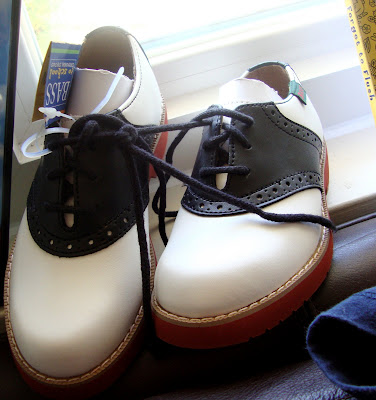 We walked into the building and within 30 seconds my cynicism melted and was replaced by a huge ear-to-ear grin. The place was packed. It was teeming with parents, kids, grandparents, brothers and sisters, aunts and uncles and it was giving off such a glow of pride and love and enthusiasm that it was impossible not to feel swept up in it all. And there was suddenly a profound sense of relief that we hadn’t accidentally missed this kind of moment.

Those teachers had those kids groovin’ like nothing I have seen before (outside of the movies). They were shaking it and rocking and rolling like there was no tomorrow.

And my boy, Jack. Oh, my boy Jack – where to begin. Well, first off he was dead center of the little choir – front row. The only blondie in a sea of nationalities. And he was workin’ it like nothing I’d seen before. He was conducting – arms keeping time to the music. He was swaying back and forth. He was boppin’ up and down. And while everyone around him was clapping during the horn section of the song, he was improvising a trumpet and playing his little heart out so much so that every single parent around us was laughing till the tears ran, and clapping till our hands hurt. And as the song finished he bowed with a flourish and blew kisses with abandon.

Smitten. We were all smitten. Teachers, parents and the preschool principal.

Oh, what a night. My heart is so full even as I type this. As I watch Micah leave babyhood behind him I have been mourning. But seeing Jackson last night, the whole, wide, wonderful, expanse of all that is still to come opened up before me. And my heart filled way up to the brim with excitement.

Our Preschool’s teachers received a standing ovation last night. Each and every parent beamed at them with gratitude for how they serve our kids on a daily basis. How they train them and love them and shape them and mold them. They are miracle makers. They take the mundane and mold its potential into reality. They do it for the love and the joy of teaching. Certainly it can’t be for the money. And I wish I could wrap my arms around that school right now and hug it as hard and strong as I feel about it right now.

Thanks GOODNESS there will be another graduation ceremony next year and the year after that. They can’t have them often enough if you ask me!