What the gang wars and the mommy wars have in common

« Five Minute Friday: Close
For the mom on her way to daycare drop off right now »

I’m reading this book on gangs and it couldn’t possibly apply less to me.

So why’m I underlining every other sentence and dog-earing the pages about the homies in East LA, then?

I’m a white, suburban mom with three kids who don’t know jack about being in or out or choosing between making it in school or making it the barrio.

But every day I look around these quiet streets lined with minivans and I read blog posts and op-eds and movie reviews and I see this war we’re in.

All us moms with our pointy fingers drawing lines in the sand and across drive ways and education choices and who stays home and who works and whether or not you’re failing to make the cut.

And we bleed guilt and cry in the corners of the day trying to make sense of who we are by discrediting who she is. We posture and pose because we don’t want what we’ve chosen to stop making sense because of what she’s chosen.

And I read this chapter on jurisdiction about teenagers who plan their funerals and race through motherhood because they don’t expect to see 30. And I see us. I see us all who “can’t seem to see one another as residing in the same jurisdiction.”

“’We are the guys who hate those guys,’ is the self defining assertion of every gang.”

We are the moms who judge the moms who stay home as lazy. Who wonder why she “doesn’t just hire a nanny, find a job and get out of the house.”

We are the moms who are annoyed by that mom on her iPhone at the park.

We are the moms who assume that if her kid is difficult then she must be a bad parent.

We are offended by each other.

We take offense at another mother.

Our sister who also bears the scars of opening her life up to the chaos of caring for someone else.

Who has also cooked more mac ‘n cheese than she would care to remember.

Who has also spent decades in a semi sleep-deprived state.

Who also has a love-hate relationship with Minecraft.

Who also questions her choices, aches for the names her kid is called in school, keeps watch at night as her baby sweats a fever, wonders if she’ll ever figure it out – this being someone’s lifeline. This surrender of space and privacy and what feels like a large chunk of your sanity. This urgent, driving desire to keep them safe and help them thrive.

The thing is, that the woman we’re so offended by – she bears your name.

She bears my name.

And diapers, curfews, and the grueling art of saying “no” run in her veins.

What if we could rip the roof off our prefab, preconceived, tiny boxes of expectation?

What if we could remember, as Mother Theresa urged, that we belong to each other?

Allowing folks into my jurisdiction requires that I dismantle what i have set up to keep them out. Sometimes we strike the high moral distance of judgment – moving our protected jurisdictions far from each other. This is also, largely, the problem in the groupthink of gangs. They just can’t seem to see one another as residing in the same jurisdiction….

The challenge is getting them to abandon the territory of their gang and replace it with a turf more ample, inclusive, and as expansive as God’s own view of things.

Kinship is what God presses us on to, always hopeful that its time has come… No daylight to separate us.
~Father Greg Boyle.

No daylight to separate us. 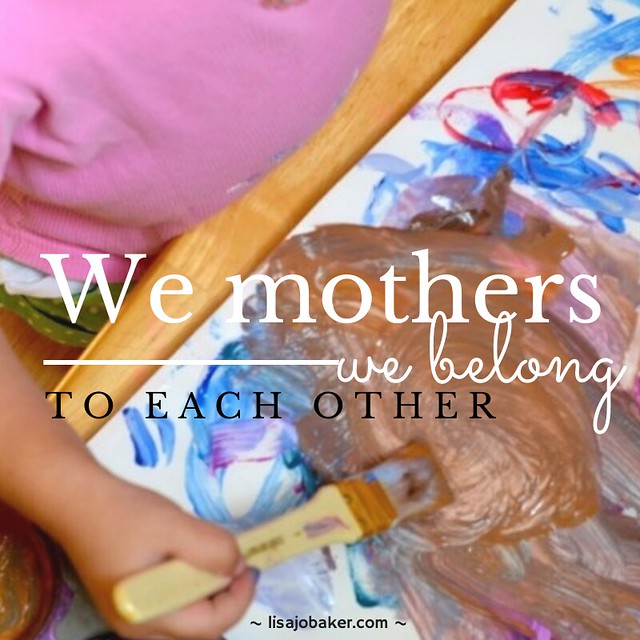 I knew a new mom once who made me crazy how quickly she lost all that baby weight. How she didn’t have to drop her son off at daycare every aching morning, who laughed at the easy familiarity of motherhood that seemed like a strange and scary land to me. We sat outside in the late afternoon sun before church one evening and I watched her feed her boy zucchini and potatoes. And I watched him eat it. While my toddler just spat up anything I offered. Everything and anything he spat up into my lap.

And she asked me, like everyone else used to, “Gosh, he’s so tiny – how much does he weigh?”

Until years later her email slipped quietly into my in box and she admitted she’d felt as lost as me. Her head as lonely a place in those first years of motherhood. Her story that felt miles away from mine, sidling up to say that we’d been in it together all along. We just didn’t know.

And just like that, the boundary line between us was erased. Or rather, maybe one of us stepped over it. And it got scuffed up by our footprints – walking right into the middle of a shared story.

Read more of my backwards journey toward motherhood in my book, Surprised by Motherhood: Everything I Never Expected About Being a Mom.