How My Obsession with Clean Kitchen Closure Was Ruining My Evenings

Work a full day. Meet boys at the bus stop. Make them an afternoon snack. Pick up Zoe from school. Make her an afternoon snack. Chase everyone off the screens and out into the yard. Yell at posse of kids playing in our front yard not to climb on the car, use the trash to build a fort, throw the balls on the roof, climb the balconies. 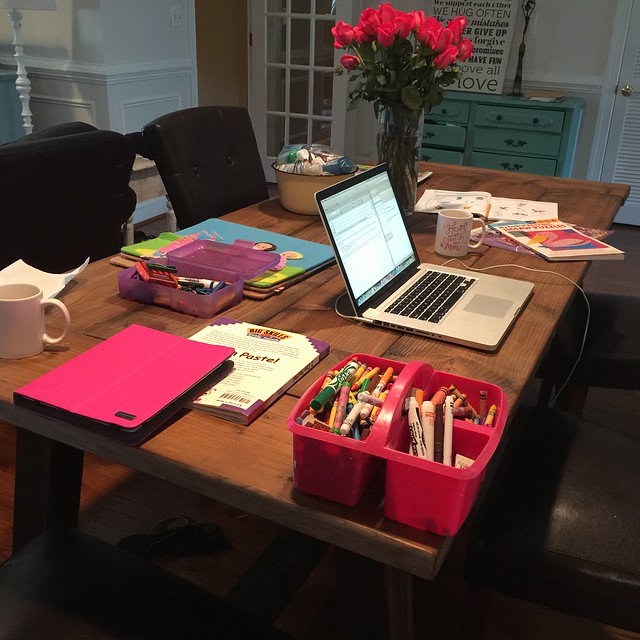 Try to come up with an idea for supper when faced with nothing but noodles in the fridge.

Give up. Read a book.

Make noodles with melted butter and cheese. Call it dinner. Let the kids help themselves to ice cream for dessert.

Start the process of cleaning up after them.

Fit in various and sundry sport schedules into this mix.

Begin the process of gnashing and wailing of teeth – otherwise called homework.

Wash dishes/fold laundry while checking spelling and math that no longer makes sense to me.

Threaten kids into the bath, out of the bath, into pajamas, and through the horrendous teeth brushing/spewing blue trails all over the bathroom ritual.

In the midst of all this Peter either would or wouldn’t be home yet. Inevitably, if he was home he’d pitch in for parts and for other parts he’d have the audacity to sit down, rest, maybe open a book.

This was liable to make my head explode.

It would result in a lot of huffing and puffing from me. And passive aggressive sighing. And ultimately ultimatums and full on rage. Coupled with exhaustion. And the fact that I still hadn’t really eaten because I’d been so busy filling up water glasses or wiping up spills or negotiating peace.

A lot of the problem, though, was pretty cliché married stuff.

But it bears saying anyway.

I simply forgot to ask. I forgot that Peter doesn’t actually have mind-reading capabilities. And I let my goal-oriented tendencies rule me right into the ground and an epic meltdown.

I felt myself going there tonight. I felt the mind-meld coming upon me after pickups and dinner and kids playing in the rain and bath time and homework and then, still, the clean up of all the red spaghetti sauce.

I felt my shoulders start to knot and my frustration start to sigh out of nooks and crannies of my face and I looked up at Peter and was about to unleash when instead I looked down at my hands and asked myself, “What am I doing right now?”

And then I asked, What do I WANT to be doing right now?”

And I thought and I knew right away, “Self, I want to be cuddled up in bed next to Zoe watching a movie.”

And I said it out loud to Peter. And then he said something radical. He told me, “Well, do that then. Leave the dishes.”

It’s weird how hard it is to walk away from a sinkful of dirty dishes, isn’t it?

Like there’s this magnetic pull to stay and finish. To create clean kitchen closure.

But you know what? Kitchen closure is also closely related to kitchen meltdowns.

So tonight, I left a pile of plates right there in the sink<—- RADICAL!

I refused to make eye contact with the glasses left on the table and the stains of spaghetti sauce on my beautiful new sink or on the table top.

I put it all down. I turned off the water. And I walked down the hallway to my daughter.

And you know what? It was a freakin’ relief.

A relief to choose the thing I wanted and that I truly needed over the thing that is a compulsion. A bosy, mean-spirited thing that will give me a clean kitchen at the cost of a snappy heart and a home inhospitable to my people.

Pete will likely load those dishes later. Or I will. But there will be more where those came from tomorrow. Tonight I need to build in rest. I need to refill my tank. I need to sniff my daughter’s hair and I need to catch up on that movie I’ve been meaning to watch right here under my cosy duvet while the rain comes down outside.

It’s taken me years to learn to build in breaks.

Because if we’re not careful we moms will just keep on going and going faster and faster and madder and madder until we ride right over top of everyone, resenting them all the way.

There are no clean kitchen police.

There are no dirty dishes police.

There are no rules for giving yourself a night off. You just have to take one. You’re the grown up. Give yourself permission to leave things undone.

Make yourself a cup of tea. Sit down. Ask for help. Tell your husband exactly what you need to unwind. Say it without whining or screaming. I predict he’ll be so relieved not to be on the receiving end of one your death glares that he’ll happily oblige. (Or maybe that’s just how it looks in our house). Delegate.

And then just let it go.

Friend, your kitchen is not the boss of you.

Put your feet up early tonight. I’ll be right here next to you.