What Do I Do When God and Motherhood Disappoint Me?

« 6 Helpful Ways to Respond to Hard Conversations Over the Holidays
This day was bad at the start, the middle and the end. But then this happened. »

There are three, maybe four writers, I would consider both some of my favorite people as well as my favorite writers. Hilary Yancey is one of them. Her son Jackson just turned one. And this is their story.

I spent a year and 20 days grieving an empty five minutes.

They were the first minutes of my son’s life, minutes of quick, quiet NICU intervention hidden from me where I lay, bleeding profusely onto the delivery room floor, the doctor remembering three stitches in that she hadn’t in fact given me an anesthetic before starting to sew me back together. They were the five minutes I had once imagined as the moments of transformation, the moments I thought I would become a mother, the moments when I would begin, if there is such a thing as beginning after nine months of pregnancy. 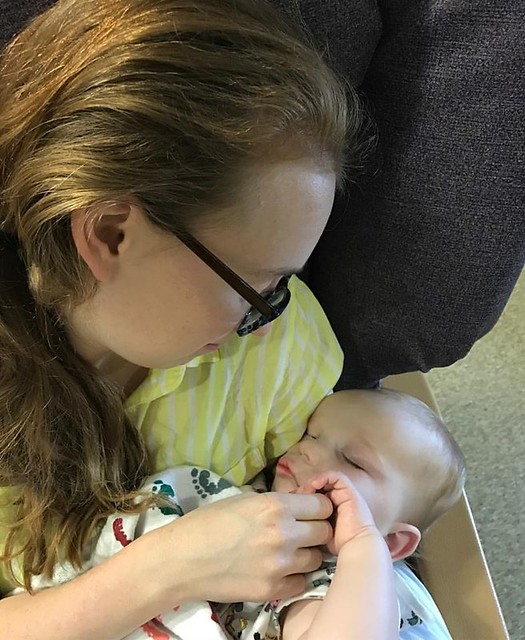 He came to me already swaddled with a breathing tube down his throat and this was the best moment of my life and it is and always will be the most beautiful picture of me. In the corner are the hands of the respiratory therapist, John, counting between breaths.

He came to me after five empty minutes of hushed voices and my own heaving heart looking for him. This is the sum of what I grieved in the year and 20 days – just five minutes. Five minutes they promised would make all the difference. Five minutes they – the “they” of blogs and fellow parents and writers about pregnancy and birth and motherhood – claimed as the best minutes, the minutes that counted.

I bet even Mary the mother of God had skin to skin. I said this once in a half-formed prayer while rubbing my hands with the foaming hand sanitizer before walking into the NICU. God should have given it to me. That’s all I wanted. That’s all I prayed for. Prayed that I could hold him, that he didn’t need help breathing. Was that too much to ask?

For a year and 20 days I grieved something I thought would make my son more than he is, or something that would be a seal on our hearts, a crown upon our heads, a halo of normalcy and goodness that I could anchor myself in when the noise of the machines threatened to drown every other sound in the world. I grieved it for my son but more, I think, for myself. I wanted the established routines and the proven benefits. I wanted the things that medicine, midwives and mothers the world over told me I needed.

The world is not sensible like this. It does not calculate, it does not obey us, it does not respond to our requests. The world, infused as it is with the love of God, presses us on all sides to go through the veil, to close our eyes, to dive into the depths of what is.

And then one year and 20 days after he was born he underwent his third surgery, a seven hour first of its kind in 400 cleft palate repair that our surgeon has ever performed. And he emerged from the OR somehow just as new and newly finished as the day he was born. He opened his eyes in the crib and looked at me, his arms swinging out uncontrollably for mine. He hid in my arms and drooled blood onto my shirt and slept for the next eighteen hours.

If I were looking for it anymore, I would say this was my second chance at skin to skin. I would say this was his rebirth, and mine, that it was the do-over I grieved not having. But I’m not looking for it anymore and it wasn’t a rebirth. It was the ordinary living of mothers and sons. It was the flame of love that burned in the delivery room still burning months later, a flame lit at a time when all was darkness and shadow.

The ordinary flame is lit once, perfect in our shadowy, veiled, incomplete seeing of it. It is lit once; it doesn’t need a do-over.