I dropped my aunt and uncle off at the airport on Tuesday and then cried so hard as I drove away that I was afraid I wouldn’t be able to keep the car pointed in the right direction.

I was completely stunned by my own mascara streaked face in the rear view mirror.

They spent five days with us. On the tale end of a trip from South Africa to the States.

My aunt is my mom’s youngest sister. She’s like a keyhole into all the literary references and keenly intelligent reading of life that I’ve missed out on the last two decades, since my mom died. There she was – this walking, talking, laughing, living version of my mother with still all her own passion and compassion and enthusiastic whoops for my sons as they whacked the baseball on Saturday. 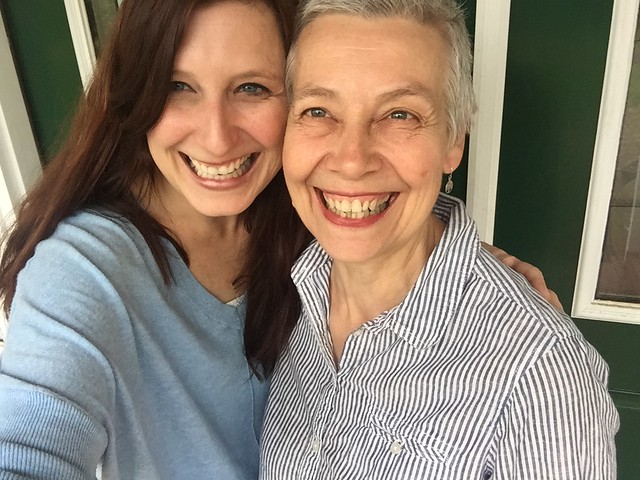 You forget what it’s like to live with family around the corner.

You forget what it’s like to live with a mother there to give your daughter butterfly kisses at night.

And then you remember. And it’s terrible because it’s so good.

You remember over shared sinks of dirty dishes or folding the laundry or staying up till midnight over endless pots of tea because there’s just so much that has to be said, so much that has to be caught up. Because who else would be so honestly interested in the ins and outs of what your children said or did or struggled with this month?

Who else would want to know all the details? Who else would relish the lives of a 10, 8 and 5 year old that are lived on such an ordinary scale and that constantly strike you as miraculous? Who else can we share these stories with if not with our mothers?

I watched my kids remember this reality that they’ve so rarely lived.

They kept forgetting what to call her – was she grandma or ouma or an aunt? Was she my mother? Whatever she was, she was family, she was bone of their bones and blood of their blood and they curled themselves into the hollow of her arms and set up camp. Comfortably. Familiarly.

This is what family does. It’s the safe place you can fall asleep at night without keeping one eye open. It’s seeing a row full of people in the bleachers and knowing they’re there for you. It’s a front row at the ballet recital all taking your picture and waving and blowing kisses proudly because you belong to them.

We belonged for five days.

It was terrible when it ended.

We aren’t built for separation. Good-bye must be the loneliest word and it split my soul right open on the exit ramp from Dulles International Airport. One minute we were unloading their suitcases and the next I was driving away from some of the core people who make me, me.

I’m a third culture kid who is comfortable just about anywhere but never completely at home in any one place. There are bits and pieces of me strewn between countries and accents and languages and it can make my outlines start to feel blurry. I smudge into the landscape of Americana and I can fit, I can say the right words – “trunk” instead of “boot”, “windscreen” instead of “windshield”, “corn” instead of “mealie” or “can’t” instead of “cahn’t.” But it makes me tired.

It can make you tired to always work at making sure the edges of who you are blend comfortably into your surroundings.

My aunt walked through the door and swooped me up in her arms and at the same time took the lid off the box I am so good at fitting into and invited me back out again. All those parts of me I so easily forget to remember. The smell of the Karoo and the feel of a million blackjacks prickling into your socks. The wild eye of the storm up on the highveld and the dust that grits up your nose in winter.

There is a language that runs deeper than words and if we lean in we can hear it again as it echoes up from the places and the people who have shaped us, formed us. I spoke that language again for five days and I felt my outline grow solid again in all those spots that have faded the longer I live away from South Africa.

Yes, America runs in my blood too. I have birthed children here. But it’s not one or the other. It’s both, and.

We are all the sounds and sights and pains of where we come from. We are our mother’s daughters.

And mine’s been gone much longer than I’ve lived away from South Africa.

But the heart of her walked back in the side door on a dark, late Thursday night and I opened my arms and found myself home again.

We motherless daughters, we understand the kind of homesick that transcends places and is rooted in people.

Five days will never be enough.

There is nothing that can fill up the sucking, empty vacuum that losing a mother leaves. There is no pretty prayer or kind word, there is no book or meal or sermon that can possibly make up for the loss of a mother. There is no life lesson or happy ending that somehow makes it right. And I know many of you have lost your moms in ways as similar or different than mine. Many of you may have mothers still living who still feel just as lost to you.

And that I believe in a God who doesn’t make things better. He makes things new.

My sons asked me this week if I wished my mom was still alive. I do. Dear God, yes I wish I could ask her a million questions about her parenting choices, tell her the times I wish she’d done it differently, and then I wish she could just be sitting here with me watching Blue Bloods because I know she’d love it.

But then, what would I be wishing away?

I’m stranded here between two lives and they feel as vastly separate as the two continents who have become part of my name.

So I look at my sons who wear my mother’s eyes and I tell them, “No. I wouldn’t undo it. Even if I could.”

Because I believe in a God who makes all things new. As terrible as the remaking process might be. As much as I may weep off my mascara in the front seat of an old minivan littered with chocolate wrappers and the car seat that always comes apart, God help me I wouldn’t undo any of it.

Because all that grief has made a new thing in me.

All that loss has made a new beginning in this new family that laughs and farts and eats dinner messily around the dining room table together in a new country I never imagined would become my own.

He who was seated on the throne said, “I am making everything new!”Then he said, “Write this down, for these words are trustworthy and true.” Revelation 21:5 (NIV)

I desperately need my mother and the scar of her loss has given me new eyes to see the world and the people in it in a new way.

I desperately need my mother and God has never failed once to give me her arms or her heart or her words through the women He has poured into my life to mother me.

I desperately need my mother and God has given me three children who have broken apart every single thing I thought I knew about her and put all those shattered expectations back into the kind of stained glass story I never would have written.

I desperately need my mother and for five days I heard the echo of her life so loudly in our house again.

He reminds me of my mother.