What if You Actually Already Are Living “The Good Life”?

« 100 Mother’s Day Gifts I Would Actually Give Myself
Custom Mother’s Day Mugs and T-Shirts to Remind us that We Save Lives Daily – Because We’re Moms! »

When Peter asked me how the kids’ baseball game was I told him, “Long and boring.”

Which was sort of true.

But there’s this other part. The part that you can miss if you’re not paying attention.

Sure, there’s lots of dirt and gravel and mud at the side of a baseball field. And it takes planning to make sure the two kids who aren’t playing have their little “sports” back packs with them filled with that random assortment of My Little Ponys, toy soliders and coloring books. Because watching for hours after an already-long day can be exhausting if you’re not on the field.

And so Zoe and Micah spread out with a blanket to the edge of the bleachers and they play in the dirt and I don’t try to stop them.

Jackson is supposed to pitch for the first time today and we’re all holding onto that excitement even as the game stretches on and still he isn’t invited up to the mound.

But in between the waiting there is so much deliciousness.

I’ve often been too tired or too distracted or too frustrated to notice it.

But as we emerge from the last sleep deprived decade, I discover nights like this – just waiting to be savored.

It’s a perfect spring evening. The sky looms large above the field and the boys are all tiny men with their measured seriousness as they step up to bat. They swing and miss and swing and miss and then sometimes they get a big hit and the smattering of parents on the stands erupts enthusiastically.

I’ve wasted a lot of time thinking glory lives in the big moments of our lives.

But on nights like this I know in my bones that the glorious ordinary is the best kind of big. 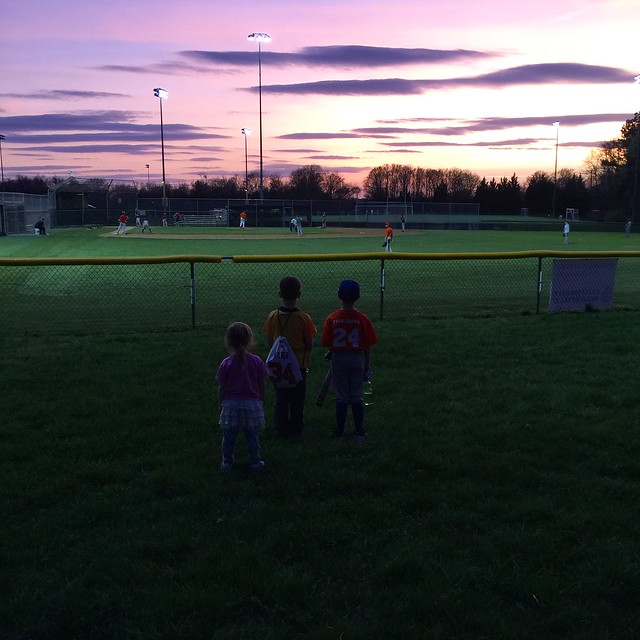 It’s my oldest’s first season of kid pitch and they are all so unsure and also so delighted at this new challenge.

They take themselves seriously. They cheer from the dug out and the parents can’t help but grin at one another. We’re still strangers as the season kicks off but we will travel far together on these hard iron stands with their completely uncomfortable seating.

The siblings make instant friends because that’s what kids do – over coloring pages and plastic dolls. And every now and again they remember to pay attention to the game.

I find myself knee deep in conversation about our ages, our kids, our pregnancies and our plans for more (or not as the case may be) with other moms because that’s what moms do.

And in the background there are Slurpees and pretzel snacks and the inevitable trip to the port-a-potty.

The sun is warm and lazy in the late afternoon and after rushing I’m just sitting still and listening and observing and every now and again leaning over to hug my daughter as she gravitates back to me for reassurance. And my other son, the one who can be ragey and frustrated, he’s sitting next to me with an arm draped across my shoulders and he’s petting my hair with his hands that have dirt caked under the fingernails.

And still Jackson hasn’t been up to pitch.

He strikes out at bat and as I watch him walk back to the dugout I recognize his posture and go to meet him as he keeps on walking into my arms, his eyes hot with the tears he’s determined not to cry. I look him in the eye and speak the kind of courage only moms can – because our children will believe with both hands the truth we offer them. And then his little brother is there womping him on the back and telling him it’s OK and I can tell it is going to be OK.

Because the coach has called him up to pitch. The last inning of the night. 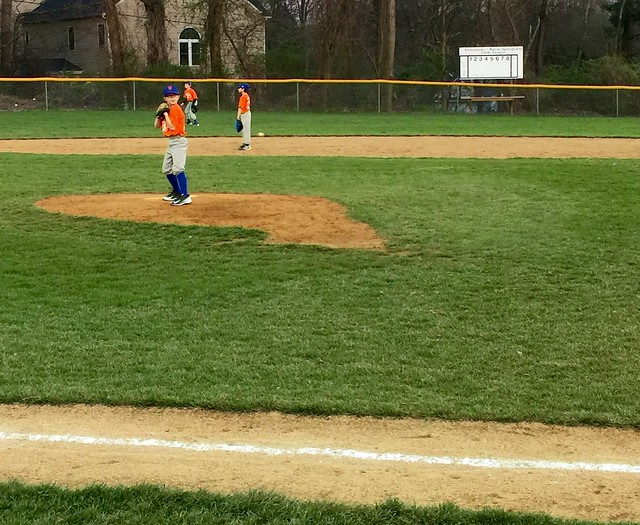 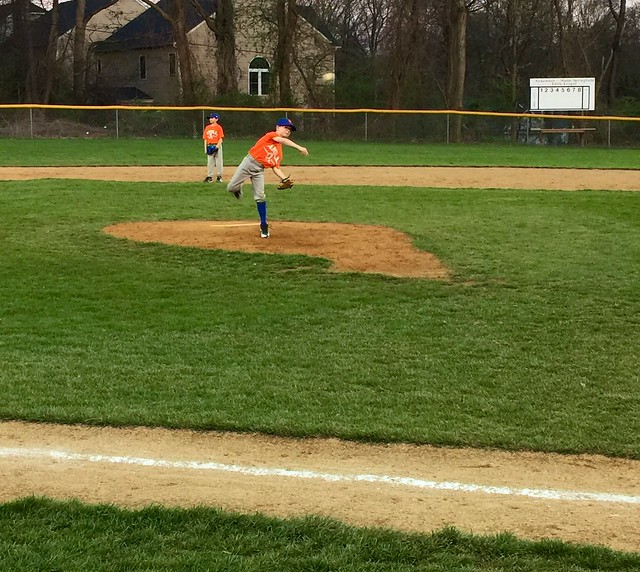 And of course you already know this isn’t actually a post about baseball.

It’s about bearing witness to the glory that sneaks into the middle of what we think of as our “ordinary” lives.

Last night was electric with it.

I watched my son step into both his fear and his passion. I watched him set his sights on the catcher and we all watched as he took a deep breath, exhaled, and let his skinny arm rip.

We cry in these small moments because there is nothing small about them.

They are huge. They are so weighed down by the glory of heaven it makes it hard to breathe under that sunset streaked sky.

The other parents feel it too. For an hour and a half every week we share the miracle of watching our children become themselves. We get to bear witness to the miracle.

And when Jackson steps off the field after getting the third batter out, one of the dads spontaneously swings Micah high into the air, because aren’t we all in this together after all?

This time when my son pelts out of the dugout it’s because joy is splitting out of his face and that kind of delight has got to be shared. We high five him and his huge little brother comes running, all dust and sweat and glee, yelling, “That was PHE.NO.MENAL.”

And it really was.

All of it. The grief and the joy. The dirty kids playing under grandstands and the parents laughing along for the ride. The boy who missed all his hits and still walked up to the mound and pitched his nine-year-old heart out.

We go to 7-11 afterwards for Slurpees. Because of course we do.

And we hold hands across the parking lot as Zoe yells much too loudly, “I love slushees; Praise the Lord!”